The Adventures of Pinocchio

Geppetto, a poor old wood carver, was making a puppet from a tree branch. “You shall be my little boy,” he said to the puppet, “and I shall call you ‘Pinocchio’.” He worked for hours, carefully carving each detail. When he reached the mouth, the puppet started making faces at Geppetto. “Stop that, you naughty boy,” Geppetto scolded, “Stop that at once !” “I won’t stop !” cried Pinocchio.

“You can talk !” exclaimed Geppetto.

“Of course I can, silly,” said the puppet. “You’ve given me a mouth to talk with.” Pinocchio rose to his feet and danced on the table top. “Look what I can do !” he squealed.

“Pinocchio, this is not the time to dance,” Geppetto explained. “You must get a good night’s rest. Tomorrow you will start going to school with the real boys. You will learn many things, including how to behave.”

On his way to school the next morning, Pinocchio stopped to see a puppet show. “I

can dance and sing better than those puppets and I don’t need strings,” boasted Pinocchio. He climbed onto the stage.

“Take these coins and go straight home,” said the Puppet Master. Pinocchio put the coins into his sack.

He did not go very far before he met a lame Fox and a blind Cat. Knowing that Pinocchio had money, they pretended to be his friends. “Come with us. We’ll teach you how to turn those copper pieces into gold,” coaxed the sneaky Cat.

“We want to help you get rich. Plant your coins under this magic tree. In a few hours they’ll turn to gold,” said the Fox.

“Show me where,” said Pinocchio excitedly. The Cat and Fox pointed to a patch of loose dirt. Pinocchio dug a hole and put the sack in it, marking the spot with a stone.

“Splendid !” exclaimed the Cat. “Now let’s go to the inn for supper.” After supper, the Fox and Cat, who weren’t really lame or blind, quickly snuck away and disguised themselves as thieves. They hid by the tree waiting for Pinocchio to come back and dig up the money. After Pinocchio dug up the coins they pounced on him.

Pinocchio’s Guardian Fairy, who was dressed all in blue and had blue hair, sent her dog, Rufus, to chase the Fox and Cat away. She ordered Rufus to bring Pinocchio back to her castle. “Please sit down,” she told Pinocchio. Rufus kept one eye open to watch what was going on.

“Why didn’t you go to school today?” she asked Pinocchio in a sweet voice.

“I did,” answered Pinocchio. Just then, his nose shot out like a tree branch. “What’s happening to my nose?” he cried.

“Every time you tell a lie, your nose will grow. When you tell the truth, it will shrink,” said the Blue Fairy. “Pinocchio, you can only become a real boy if you learn how to be brave, honest and generous.”

On the way to home he met some boys. “Come with us,” said the boys. “We know a wonderful place filled with games, giant cakes, pretty candies, and circuses.” The boys didn’t know that if you were bad, you were turned into donkeys and trained for the circus.

It was not very long before the boys began changing into donkeys. “That’s what happens to bad boys,” snarled the Circus Master as he made Pinocchio jump through a hoop.

Pinocchio could only grow a donkey’s ears, feet, and tail, because he was made of wood. The Circus Master couldn’t sell him to any circus. He threw Pinocchio into the sea. The instant Pinocchio hit the water, the donkey tail fell off and his own ears and feet came back. He swam for a very long time. Just when he couldn’t swim any longer, he was swallowed by a great whale. “It’s dark here,” scared Pinocchio said.

Pinocchio kept floating deep into the whale’s stomach. “Who’s there by the light?” called Pinocchio, his voice echoing.

“Pinocchio, is that you?” asked a tired voice.

“Father, you’re alive !” Pinocchio shouted with joy. He wasn’t scared anymore. Pinocchio helped Geppetto build a big raft that would hold both of them. When the raft was finished, Pinocchio tickled the whale. “Hold tight, Father. When he sneezes, he’ll blow us out of here !” cried Pinocchio.

Home at last, Geppetto tucked Pinocchio into his bed. “Pinocchio, today you were brave, honest and generous,” Geppetto said. “You are my son and I love you.”

Pinocchio remembered what the Blue Fairy told him. “Father, now that I’ve proven myself, I’m waiting for something to happen,” he whispered as he drifted off to sleep.

The next morning Pinocchio came running down the steps, jumping and waving his arms. I He ran to Geppetto shouting, “Look Father, I’m a real boy !”

April 24, 2016 | Categories: Disney | Comments Off on The Adventures of Pinocchio 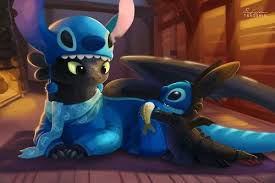 Inside Out Conspiracy Theory- Riley has a SIXTH Emotion?!

April 3, 2016 | Categories: Disney | Comments Off on Inside Out Conspiracy Theory- Riley has a SIXTH Emotion?!